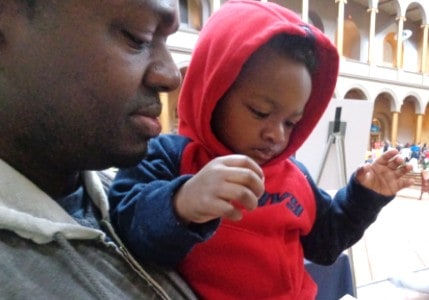 Celebrating Fathers: Our Heroes At Home

Celebrating Fathers – our heroes at home is beautiful experience.

Fatherhood is also underrated and sometimes (or shall I say, more often than not) underrepresented.

Although mothers play a pivotal role as a parental figure, a father’s role has a much richer impact in a child’s life (especially when in the home).

If you are wondering how, think of how many times you have you heard a mother say, “Don’t make me call your father” and a child’s behavior automatically changes for the better.

This is actually the case whether there is one child or multiple children in the home. But even this, is not fatherhood or what it represents.

Being a father is being the best version of yourself to and for your children. It is about understanding the importance of presence, engagement, and accessibility.

And guess what, they still lack the credit they deserve.

In an effort to celebrate fathers- our heroes at home, it is important to look beyond the challenges they face and the worldly superficiality towards them and give emphasis to their vitality in the home.

Why is it important to highlight the impact of fathers in the home? Because a father’s daily presence in the home can set the tone for the day from the moment the sun comes up until the dusk when it is time to go to bed.

Fathers naturally have a way of instilling daily tradition in a way mothers cannot (mostly because men are typically seen as authoritative in a two-parent household).

And by no means am I saying women cannot be authoritative (because they are); what I am saying is that a father is seen differently by children.

It is one of the few realities that has not fully shifted in our society today.

Believe it or not, many fathers have the mindset of being an extra “set of hands” in the home.

And like mothers, many fathers are always doing the best they can for the children in the moment and as things are happening.

This is why fathers should be celebrated as heroes, too.

While there are countless generations of successful co-parenting adults, there are significant realities in a two-parent household that can alter and/or change the dynamic of raising a child or children.

In the home, a father adds immediate value to the social development, cognitive understanding, and contextual language of a child.

Children learn a lot by what they see and what they hear. They connect nonverbal cues to verbal cues to better the context of their understanding and their emotional development. They develop social cues the same way.

As we acknowledge and celebrate fathers, here are additional reasons they are heroes in the home:

Although the emotional development of children in the home is associated with mothers, fathers also play a vital role.

Fathers, just like mothers, have consistent involvement in day to day activities (even if as simply as waking up the children or helping them get dressed).

They are also instrumental in the growth and development of a child’s emotional stability and well-being. How? Children often look up to their fathers and rely on them for emotional support (especially if involved in activities).

They also look at fathers as rule-makers.

It is not uncommon for children to believe their fathers are there to establish and enforce house rules and the consequences if those rules are broken.

This instills in children a sense of security. And this sort of security spans from emotional to physical well-being.

Due to the level of admiration children have for their fathers, they always strive to make their fathers proud and to uphold the rules made to ensure they maintain sense of emotional security.

It is especially evident when fathers are supportive and affectionate at the same time they discipline; as it significantly affects the cognitive and social development of their children.

After all, fathers are great at boosting the self-confidence of their children and their overall sense of well-being.

FATHERS INFLUENCE THEIR CHILDREN’S RELATIONSHIPS WITH OTHERS

Fathers who are positively involved in the home set the tone of their kids’ relationships with others in the society.

It is common that fathers influence both their children and their spouses or significant others.

Fathers have the ability to shape the way their family members relate with others as they grow and begin to interact with people (both inside and outside the home). How? The way or manner in which a father treats his child influences what he or she seeks in other people.

Children often choose their lovers, friends, and spouses based on how he or she perceived the value of the relationship with their father.

So, the patterns which a father sets in the relationships with his child or children dictate how his children relate with other people.

Fathers that are actively involved in the home commonly secures a better outcome in almost every aspect of their children’s wellbeing.

This ranges from educational achievement and cognitive development, to social behaviors and the aspect of self-esteem.

According to one research, children who grow up with fathers that are involved fathers are 39% more likely to earn A’s in school.

They are also twice as likely to attend colleges or universities and secure stable employment after high school.

Besides, they are 80% less likely to spend time in jail, and 75% less likely to have a teen birth. (A present, actively involved father is like a natural birth control for young girls)

These statistics are plausible because a father residing in the home makes the child more driven.

What child doesn’t want to please his or her father? This also allows children to learn to focus on their priorities.

A father is as a guidance provider that constantly gives direction to his kids.

He also shows them what is important in life and shares his wealth of experiences with his children.

Fathers are never short of “when I was younger…” stories.

Little girls change men. This is a fact. The term “daddy’s girl” is more than a myth.

A girl just needs her dad and for so many reasons that it would result in endless writing – to say the least.

Girls depend on their fathers for emotional understanding and security, proof of love, what a healthy relationship looks like, chivalry of a man, and most of all, sets the tone for how she sees herself.

Fathers teach their daughters to be independent, strong, and self-thinkers (even in relationships).  Whether a father has one girl or ten, they all look to their fathers to be not just their hero, but their personal comfort.

No matter how many years go by, every girl knows as long as she has her dad everything in the world will be okay.

Just as it is common that girls model their relationships based on the characteristics of their fathers; little boys often model themselves after their father’s behavior and character.

From a very young age, boys seek approval from their fathers and what to do well to impress them. They love the competition with their fathers; as it shows a sense of manliness to say they won at something.

This is equally rewarding to a father (knowing their sons are not only competitive, but also desires to succeed).

As human beings, we tend to grow up by imitating the character and behavior of the people around us (socialization); which is how most children learn, grow, and function in this world.

If a father is upstanding, respectful, and treats everyone with respect, young boys often become men with same character trait.

When a father figure is absent, young boys tend to look to other male figures to act as their role models to help them set “rules” to guide their behavior and affect their mode of survival in the world (even if it is not culturally or morally acceptable).

There’s a great deal of companionship that comes with being a father at home.

It goes both ways for both parents. Having someone to share parental and house responsibilities with makes stress a little easier to manage; as well as gives a little balance for self-care.

For kids, companionship shows children resiliency in relationships. Children need to witness companionship between a mother and father to understand what it looks like and what it means to have a healthy family first value system.

Fathers are aware of everything that goes on in the home (especially when communication is shared between parents).

On several occasions, fathers get firsthand details on happenings and events as they happen.

Another positive of being a father at home is the companionship they enjoy.

What’s better than having kids to keep you on your toes or depend on you?

Fatherhood is far from boring.

Fathers bring their families together by ensuring time is spent together.

While mothers typically plan family vacations, a father’s support is always a plus (especially if a car trip).

Fathers also add an element of camaraderie as men are often more relaxed than women in the home.

Fathers view family like a sports team that works together to achieve a common goal.

This is evident in simple house tasks like taking out the trash, gardening, cooking, and fun time with the family.

It is evident that there are more advantages of having a father in the home (especially when they are actively engaging with the children).

Fathers who are actively involved should be celebrated just as much as mothers are recognized.

They are their children’s heroes and therefore celebrating them is just as important.

No matter the physical, emotional, and financial challenges faced by fathers, they work hard to secure a good life for their families.

Of course, for a man, the role of being a father is beyond monetary necessity; they feel affectionately about their family to ensure they are good role models to their kids and a great companion to their spouse or significant other.

CREATIVE WAYS TO CELEBRATE OUR FATHERS: OUR HEROES AT HOME

That’s all for now.

I hope you and your family will have a memorable and meaningful Father’s Day.

Over 200 Activities for fathers and kids

This site uses Akismet to reduce spam. Learn how your comment data is processed.